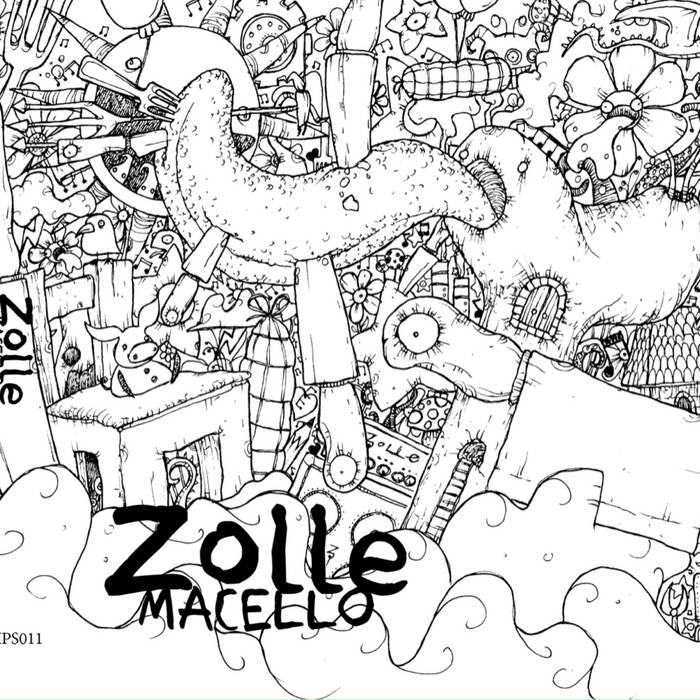 Tape version of Zolle's 2020 album "Macello" (courtesy of Subsound Records / subsoundrecords.it).
Includes a weird, totally exclusive, altered, re-mixed and scattered version of the whole record, orchestrated by the band themselves, plus a series of 50 handmade original handmade drawings designed by Berlikete (berlikete.com).
Each tape contains a unique piece of art.
Limited to 50 copies.

"Macello, the fourth record of the duo Zolle, wants to symbolize the human condition of living in ambivalence, contradiction, paradox.
Macello (Italian word for Slaughterhouse, but means also “mess” or “shindy”) is the crudest expression, in all senses, of the coexistence of end and beginning, death and life, absence and presence, tragedy and opportunity.
A significant place, a time suspended, a powerful ritual, a real mess.
It is certainly a convivial record, but a little poisoned, it takes you with feet on the ground, sometimes it makes you dream.
Macello was born to be born, genuine, in the rehearsal room, faithful to the meeting of Stefano (drums and voice) and Marcello (guitar and voice), distinguishing itself from albums conceived in function of a premeditated and probably written destiny.
Macello is meat, not plastic.
In Macello we find the value of authenticity, with a real, direct, analogical performance on tape, with overdubs reduced to the bone, so that the listener can perceive himself in the dimension of Zolle's concert, vibrating with energy.
This time, perhaps to mark a bridge to the future of the Heavy Rock duo, there are trails of voice, never used in the past.
S'OFFRE: the opening song represents the conceptual and emotional synthesis of Macello.
D'IO: second song, reinforces Macello's understanding.
M'IO: it belongs to everyone. (Mio means “mine”)
M'ACCETTA: illusion, in a thousand pieces.
L’ARA: the lovely tractor driver.
L’AMA: suffers.
D’ANNATA: All the good things, you know...
L’AURA...
Macello was recorded and mixed in August 2019 by Giulio Ragno Favero at Sotto il Mare Recording Studios in Madonna dell'Uva Secca (Verona, Italy) and mastered by Giovanni Versari. Cover Artwork by Berlikete and Eeviac.
There’s a lot on their plate! "